Friday, June 27th
After completing our massive Paris-Roubaix adventure on Thursday, Friday was a day for recuperating and preparing for the upcoming weekend. The team did a split workout to prepare for the weekend in an ideal manner. I joined a limited group that completed a one hour rain ride, along the canal that traverses through Oudenaarde. It turned out to be beneficial before Saturday. Riding, training, and racing in Southern California is outstanding but it is not the greatest preparation for the consistent rain and wet roads of Belgium.

Saturday
Saturday included our first kermesse, of the weekend, and brutal racing conditions. After beginning under clear skies, the heavens opened fifteen minutes into our race. The rain continued for the remainder of the race, which was slightly over two hours. Being littered with rain water, mud, and grit for multiple hours is ridiculous. The country roads that we were racing on proved to be a test against the hard men of Belgium.
Aside from the poor weather, which is all part of the experience, the race was full of action. Although a group of about forty riders finished together, breakaway groups were attempting to escape all day. I made my bid early on and was fortunate enough to take a prime with the help of teammate Kendal James. Joining forces with two more riders prolonged the pain but we were not able to stay away from the charging field. The wet conditions made navigating the tight, twisty course more difficult and I witnessed three miserable crashes, during the course of the day. After swerving around a crash in the final turn of the race, I found myself chasing the peloton. I finished about five seconds off the pace, in 37th. A total of 92 juniors started the race and about 50 finished. Kendal, Robert, Tom, and I finished slightly behind the main group, after being caught behind the crash.
The car ride home was quick, which was greatly needed. Mr. Shein was an enormous help and he succeeded in preparing our bicycles for the kermesse on Sunday. I never doubted him for a moment and his selfless drive is inspiring. While Mr. Shein was washing and fine tuning our bicycles, we were busy cleaning equipment for the following day. A lovely dinner of spaghetti and meatballs closed out the day on a warm note. The morale was back up heading into Sunday.

Sunday
Sunday was another day occupied by persistent rainstorms and the possibility of thunderstorms near Ravels. The team was set to race in the Ravels region but the morale was low with heavy weather, during our drive to the race. However, the rain was letting up as we approached our race and the high road was taken.
Registration, or "Inscription," as they call it here, took place in the back of a small bar off of the race course. After taking care of our registration and number situation, the usual race preparation began to take place. The list consisted of: bike priming, number pinning, weather discussions, clothing decisions, and lathering up the legs with oil. It is a tradition to be rubbed down with oil, as a form of massage, prior to racing. A few team riders have been taking the approach but I have not. Our final instruction was given to us by Jozef, who will be acting as our team manager in the upcoming stage race.
The race was about to begin and the team caught a glimpse of the Junior Belgian National Champion, on the start line. He is undoubtedly treated as a national hero, wearing the number one bib and starting on the front row. However, never give anyone respect until you have raced them. The course consisted of twelve laps at seven kilometers, for a total of 84 kilometers. As compared with our first two kermesse races, this course had fewer turns, wider roads, and more extended stretches to increase the pace. I sat in the pack for the first hour of the race, prior to moving forward. It is impossible to describe the bike handling skills, confidence, and mental perseverance needed to survive a kermesse. The peloton is tightly packed and always fighting for position. It is a good feeling to be off the front and not have to worry about the madness behind. I was able to make a breakaway with about 45 minutes remaining in the race. The breakaway group consisted of about twenty riders, including the Belgian National Champion. He made a move with about three laps to go, which was countered by his teammate from Avia Crabbe. Avia Crabbe is a junior development team for Omega Pharma Quick-Step. I immediately jumped onto the wheel of the rider because counterattacks have a great chance of succeeding. Originally, it was the two of us before we were joined by two more riders. The four of us remained off the front of our chasers to the very end. In the final sprint, two riders came around me fairly easily. I lost by about a bike length to the third. Finishing fourth, in my third kermesse, is a performance that I am very excited about.
The afternoon ended with number return, prize collection, and van loading, prior to heading home. I think it is fair to say that everyone was very tired, after the long weekend of racing, but we still had enough energy to make up a pasta dinner and crack jokes at the dinner table. 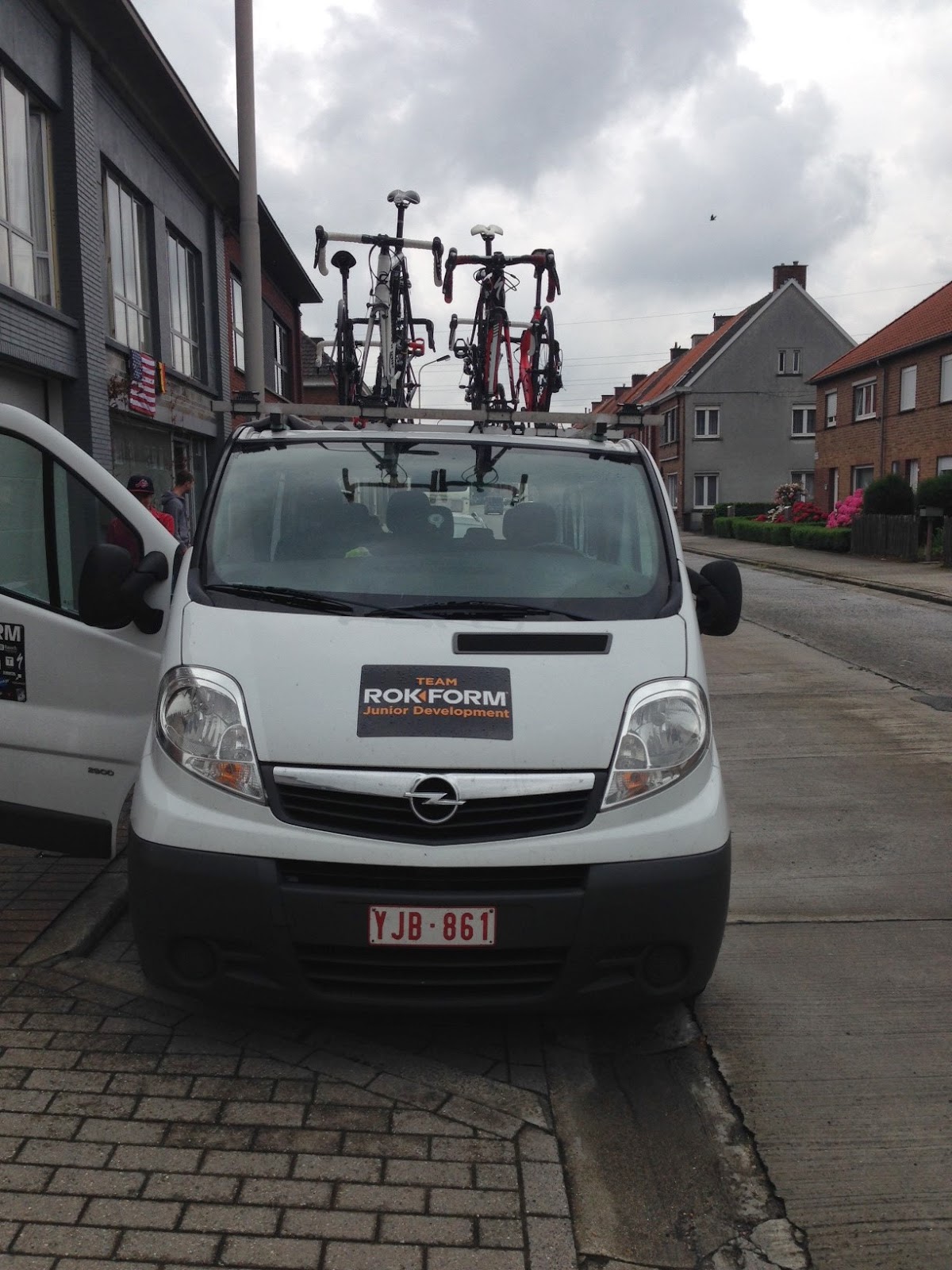 The weekend is over and the team is excited for a mellow week. Our next race will be Sint Martinusprijs, in Kontich, Belgium. It is a five stage, four day stage race, which will occur from Friday through Monday.
Posted by Sean Bird