After having time to reflect on the 2015 Amgen Tour of California and my experience with GU Energy Labs, it is time to make an attempt at putting thought and emotion into indescribable experiences.

Phase One: Stage 4 - Pismo Beach to Avila Beach.
For me, it all began in my new backyard, as a current student at California Polytechnic State University, San Luis Obispo.

While I surely possess a prominent sense of bias, I do believe it is fair to claim that this particular stage route was one of the more impressive, beautiful, and interesting. With a rolling start on the Pismo Beach Pier and an extended southern loop, Stage 4 marked a combination of flatlands, canopied climbs, sketchy highway pedaling, and beachside sprint finishes.
However, Stage 4 was more than a cycling adventure. It was a time for me to engage in thorough, meaningful discussion with new counterparts. It was a privilege to spend time with members of the GU "Core Six" who were partaking in an eight day endurance adventure, while including product analysis and testing.

Also, the GU support team were amazing. Three individuals who managed to always produce a smile, while selflessly supporting physically exhausted and needy cyclists.
Unfortunately, I was not able to skip class for Stage 5, as suggested, so I was left to imagine a fun-filled weekend, before returning to class.

#MoreKidsOnBikes was a weekly theme and I was fortunate to cruise with the GU "Core Six" and a host of Team Rokform junior cyclists.

Stage 7 was no easy day, as it included three significant climbs near my hometown in Southern California.

It was amazing to spend the day surrounded by a host of gangly and eager juniors, while climbing with GU Co-Founder and CEO Brian Vaughan. He kept me honest, we shared some good tales, and I was able to view a glimpse of significant product and performance testing.
I did not make it to Mt. Baldy on Stage 7. After hearing a rumor of snow at the peak, my pops and I decided to pedal a limited amount, before viewing the professional cyclists at work.

The running engine of a police cruiser kept us warm, before a chilly descent. At the base, we were able to shed cold weather clothing that had been used throughout a day of heated climbing and crisp descents.

We lived to fight another day.

Phase 3: Stage 8 - L.A. Live to Pasadena.
Stage 8 was the final push for the GU "Core Six" squad. It was a pleasure to roll into Pasadena and the Rose Bowl with my father and a group of friends.

Cycling has provided me with a plethora of opportunities. After essentially learning to ride a road bike at the Rose Bowl and completing countless three-mile circuits, the Rose Bowl had a renewed energy.
After entering the Rose Bowl and speaking with the GU "Core Six," about one hour remained before the professional finishing circuits. My father and I, alongside Brian Vaughan, rode some of the local hills in La Canada and Pasadena, before witnessing a thrilling finish. The 2015 Amgen Tour of California was complete and it proved to be a thriller.

... A Group of Friends and Memories.
After having the privilege of completing multiple stages with a focused group from GU Energy Labs, it is fair to say that GU is more than a company and more than a product. For me, GU represents a group of friends and positive memories.

While reaching for an energy gel, drinking from a GU branded water bottle, or wearing a GU branded piece of clothing, I partially consider the performance benefit, before indulging in positive thoughts, memories, and outrageous experiences.

Overall, the 2015 Amgen Tour of California was the experience of a lifetime. I am stoked to have done it alongside the GU "Core Six," the GU support team, and my fantastic parents. I cannot thank GU and my family enough for their outstanding generosity and assistance. I will forever be indebted.

Until next year, keep on moving.
Posted by Sean Bird No comments:


During the month of April, 30 Wheelmen members participated in the Strava challenge, while members tallied over 20 days of collective ride time! 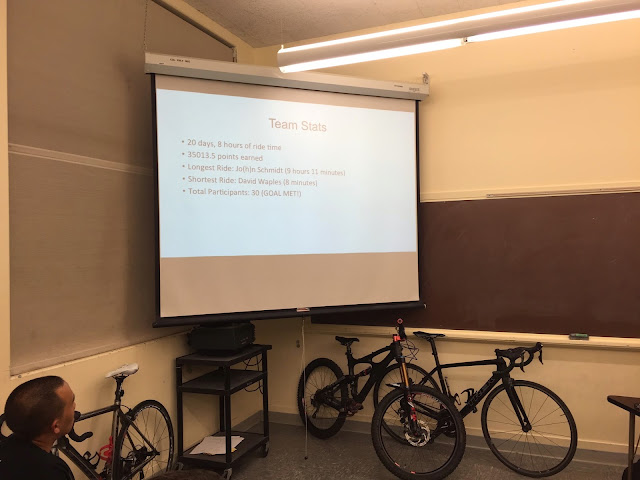 The Wheelmen Strava challenge is a new concept for the 2014-15 academic school year. It encourages cycling, both on a social and competitive basis.
Riders were awarded points for ride time, group riding, and racing. Both group riding and racing provided extra points.
Posted by Sean Bird No comments:

In an attempt to become well acquainted with the 2014-15 Cal Poly San Luis Obispo Wheelmen community, Brooks Kelly marks the 12th rider spotlight. The following information was provided as a set list of questions that Kelly entertainingly answered.  With responses ranging from the importance of ride partners to kettle corn, and an interest in eventually writing iOS applications, you do not want to skip this read. All responses are unedited.

How long have you been a member of the Cal Poly San Luis Obispo Wheelmen or Wheelwomen?
I joined the wheelmen during winter quarter. I had been riding bikes for two years but decided competing in races was what I wanted to do.

What does it mean to be a member of the Wheelmen community?
Being a part of the wheelmen community means always having someone to ride with.  Before I joined, I was always doing solo rides which gets boring after a while.  I’ve met tons of great people who are always willing to explore new routes.

What cycling disciplines are you involved with?
I am only involved in road right now, but plan on starting to mountain bike over this summer and competing during the season in the fall.

Please describe your favorite San Luis Obispo ride.
My favorite route so far is Old Santa Rita off of Old Creek Rd.  Lots of dirt roads with very low car traffic and extremely scenic views.  Credit goes to Chris Ha for showing me that one.

What are you studying at Cal Poly San Luis Obispo?
I’m currently in my junior year, studying mechanical engineering.

Spotify or iTunes? Let us know your favorite tracks.
I’ve been using Spotify for the last two or three years.  The student discount is a great deal. I’ve been listening to Always- Classix Remix quite a bit recently.

Vans or Converse?
Converse all the way.

Sweet or savory?
Sweet.  I will destroy a bag of kettle corn if I get my hands on it.

Please provide us with one interesting fact about yourself.
I learned Spanish before I learned English. I had a nanny when I was 5 months old who taught me Spanish.  I’m still fluent and acted as my family’s translator when we travelled to Mexico when I was 10 years old.

Aside from cycling and education, what occupies your time?
I try to hike the surrounding peaks as much as I can. I’m also trying to teach myself some coding to eventually write iOS apps.

Although it has become a less frequent segment, in an attempt to become well acquainted with the 2014-15 Cal Poly San Luis Obispo Wheelmen community, Adam Evard marks the 11th rider spotlight. The following information was provided as a set list of questions that Evard formally answered. All responses are unedited.

How long have you been a member of the Cal Poly San Luis Obispo Wheelmen or Wheelwomen?
This year has been my first on the team and it has been great!

What does it mean to be a member of the Wheelmen community?
Being on the Wheelmen gives me the opportunity to hang out with and meet people, both on and off the bike, who I otherwise wouldn’t know. And there is always someone to ride with!

What cycling disciplines are you involved with?
I’m primarily a roadie. Sometimes I take my mountain bike out, and sometimes I just ride my road bike on dirt.
Please describe your favorite San Luis Obispo ride.
I really like riding out to Huasna Valley.

What are you studying at Cal Poly San Luis Obispo?
Finishing up my second year of Mechanical Engineering

Spotify or iTunes? Let us know your favorite tracks.
Spotify. I tend to listen to a variety of stuff but usually lots of folk and Americana. Shakey Graves has been a favorite of mine for several years.

Please provide us with one interesting fact about yourself.
I’m a twin! My sister goes to UC Davis.

Aside from cycling and education, what occupies your time?
I spend way too much time watching TV. Also I build bike frames with the Cal Poly Framebuilding Club.

Shimano CE-S60R photochromic sunglasses are a piece of the emerging and increasingly prominent cycling eyewear, which includes an R-Series and an X-Series.

Fit
During product testing, it was noticeable that the Shimano CE-S60R design is suited for a more narrow facial structure.

However, through remaining snug, the sunglasses certainly remain in place without bobbing excessively.

A sleek, minimal design is presented with a focus on function, maintenance, and customization.

Personal appeal and preference is just that, personal. Therefore, additional images should provide a clear view.

Function
It is noticeable that the Shimano CE-S60R sunglasses place a focus on function over design.

Prominent features include photochromic lenses and a lens angle adjuster.

Overall, the Shimano CE-S60R photochromic sunglasses are unique and functional. With a focus on innovative features, Shimano is providing a different perspective on eyewear.
Posted by Sean Bird 2 comments:

This past weekend managed to become a true adventure, while coming to the realization that endurance athletic competitions are no joke.

After a lengthy week at school, this race report is far overdue. However, I feel that it is still necessary to release my thoughts.

The complete race managed to tally 42 miles and 6,000 feet of climbing.

For me, the racing was outstanding prior to heading out for a final, deathly lap. After three laps of feeling strong and riding well, major cracks began to appear.

On the fourth lap, hamstring cramps, as I attempted to climb the first of numerous steep pitches, reminded me of my mortal status. My back was tightening and uncomfortably sore, due to a combination of my roadie inspired upper-body and the harsh, bumpy terrain that I was paving with my hardtail mountain bike.

While my body was on the limit, my mind remained calm and motivated. I never contemplated giving up or backing down. As competitors began to pick me off, I trudged forward.

Through a combination of conservative riding, walking, and continuously stretching my seizing right hamstring, I managed to save my slowest lap for when it counted most. However, it was also my most meaningful lap. It was a journey and an adventure. Additionally, I got to notice some spectacular views, which did not take place on laps one, two, or three.

After nursing my way to the finish line and hearing motivational words from my parents, I managed to win by a mere three seconds, after close to four hours of racing.

While the result is not all important, it is a reminder to never stop moving forward and good things will follow.

After the event, I was inspired by motivational Facebook messages, where a common theme rang throughout. The difficult events determine true character, motivation, and drive.

Keep moving forward and never give up without a fight.

Thank you for reading.
Posted by Sean Bird 1 comment: