Once summer begins cooling off, as we move into fall, this will be the garment of choice.

Hot off the press are a pair of my most recent product reviews, through Art's Cyclery.

First, I was fortunate enough to review the Castelli Men's Mondiale Bib Shorts. Give it a glance, give it a read, and let me know your thoughts.

For the Art's Cyclery blog, the second piece in a paired review is Capo's Corsa SL bib short. Paired with Capo's Corsa SL jersey, these garments make for a legitimate combination.

Take a minute and give my latest Art's Cycling review a read.

For the Art's Cyclery blog, one of my latest product reviews revolves around Capo's Corsa SL jersey.

Give it a read. Give it a glance. Let me know your thoughts.

"You're doing that on bicycles?" was quickly followed by "Why?" when my father and I would speak with interested locals. Honestly, we never possessed a sane or consistent response, even after discussing our reasoning on multiple occasions.


Those four words manage to closely describe our reasoning. However, especially in remote locations of Northern California that approach the Oregon border, people did not understand.

Beginning in Eureka, California, which is about 100 miles south of the Oregon border, my father, mother, and I set out on a journey for Morro Bay, which is located along the Central Coast. Pops and I would pedal, while my mother took advantage of California's breathtaking scenery and endless exploration possibilities.

Up north, life is different... way different. After being born and raised in Southern California, just 15 miles from Los Angeles, an international hub that possesses a bustling population of nearly four million souls, briefly cruising through 250-person settlements was eye opening.

Day one rolled through Humboldt County and the Redwood National Park, after beginning along the Lost Coast of California, which was depopulated in the 1930s. If nature and scenery float your boat, this 102 mile route is pure gold. In this case, I'll let a few pictures do the talking.

Day two was our "shortest" hop from Benbow to Mendocino. More rugged coastline and rigid Redwoods provided plenty of amusement. However, the true story of the day was killer climbing and even better descending. Yes, the roads were becoming busier as we approached San Francisco, but an inland portion of Highway 1 made my day. 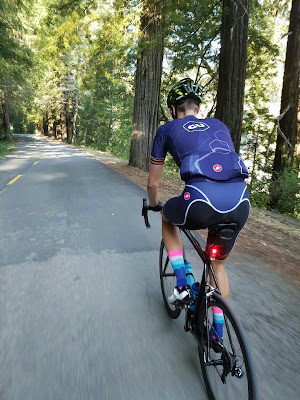 Proudly, I rocked my GU Energy Labs kit on day two of our saunter down the coast. During the past few years, GU is a brand that I have been fortunate to work closely with. Their capsules, mix, tabs, gels, and recovery were a significant portion of this endurance test. With anything, reducing variables is comforting. Knowing that GU product was going to be stashed in my jersey pockets for five-seven hours daily was fantastic.

On the third day, conditions were eerie. Moving from Mendocino to Bodega Bay took place in an omnipresent fog layer that hindered visibility and any hope for summertime heat. Maybe it was due to the lack of views, but day three was all business. In 5:30 hours, 98 miles and 7,300 vertical feet were covered, while averaging 18 miles per hour. At the end of our day, it was back to reality, living a life on the road and changing in liquor store parking lots.

For me, day four capped off a brilliant cycling trip down the coast of California. Nagging Achilles tendon pain caused me to pull the plug, while pops forged ahead for a fifth and final day. However, during day four, a rough start caused worry.

Climbing out of Foster City, we had 112 miles to reach Monterey. The initial 10-15 miles occurred on punchy climbs with misty conditions. After reaching our high point, we descended down to Highway 1, before being buzzed by vehicles for the next 40 miles. Eventually, we reached Santa Cruz, a city filled with color and zest. A stop at The Buttery allowed for a refueling period, before inserting headphones and buckling down for a few hours of farm roads that landed us in Monterey.

Now, the deed is done. As I sit at a desk and examine the bright, plain, calm Southern California sky, I oddly miss the rugged coastline, passing automobiles, and poor weather conditions.

Last week, I embarked on the trip of a lifetime. Why? Well, the adventure seemed exciting, as opposed to remaining inside for extended periods of time. The challenge was awesome, which provides perspective for additional difficulties. The scenery was breathtaking yet unexplored by billions of people. Finally, the journey allowed for new roads, new people, and plenty of summer bonding with the parents, which can't be taken for granted.

So, after learning to ride bicycles at 3 years of age and beginning to race at 13, I am now a 20 year old trying to find my place. Through using the bicycle as a tool, I have journeyed to distant locations that I otherwise would have never visited, while meeting individuals that have a story to share and wisdom to impart.

Therefore, throughout this past week, I have been grateful to be a member of the cycling community. From adventure to racing, bicycles are a powerful tool with extended possibilities.

Regardless of your interests, passions, and ultimate vision, keep breaking down barriers and exploring the unknowns.

Thank you very much for reading, while following along with an extensive journey down Cali's coast. Until next time, get outside.
Posted by Sean Bird No comments: